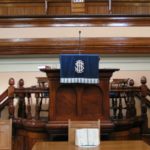 I want a Christian Counsellor.

I work a few days a week as a Mental Health Practitioner in our local NHS Mental Health Resource Centre. GP’s refer to us people with such concerns as anxiety, depression, and eating disorders and we then offer assessment and interventions such as counselling, Cognitive Behavioural Therapy and Mindfulness.

There is a church not far, far away that I drive past on a Sunday night after dropping my adult children off at their various residences. As I pass I see people leaving, having stayed behind for the familiar tea and biscuits after church fellowship. As I see them walk home I find myself wondering if they realise that they attend a church that can be thought of as the last bastion of eighteenth century Welsh Calvinistic Methodism. What is ‘eighteenth century Welsh Calvinistic Methodism?’ I hear you ask. Well, it can be summed up by the phrase ‘It is better felt than telt’, as a way of expressing what is viewed as important in Christian experience. Eighteenth century Welsh Methodist placed great store on subjective experience. It wasn’t enough to believe in Christ, you also had to ‘feel’ your belief in Christ. ‘Mere’ faith was viewed as inadequate, even dangerous and so Christians were encouraged by their leaders to ‘seek’ experience, ‘not to rest’ until experience was found and even to ‘sue God’ until you ‘felt’ what you believed.

The Diary of a (Ministerial) Nobody: Part 1

A few years ago when read the reflections of a well-known preacher I came across a comment he made on his Ministerial colleagues.  He said that whilst he was always glad to ‘see the faces’ of his colleagues either in his own church or at Minister’s Conferences he ‘got very little from their preaching’.  This preacher is a frequent speaker at both Ministers’ Conferences and Christian gatherings.

Crawling beneath a rock

I’ve been a Minister for over twenty five years now and during this time, for about ten years, I sought to engage with the wider church scene.  I attended Minister’s Conferences, led a local Pastor’s Fraternal, took part in Workshops and counselled individuals with mental health problems.  I had two aims: first to share the fruits of my PhD studies in Ethics and second to enable Pastor’s to better help those in their congregations suffering a mental health problem.